On June 19, 2013, a group of 10 Combat Wounded and Injured military veterans, guides and their support staff embarked on a courageous and inspirational backpacking expedition to descend nearly 6,000 feet to the bottom of the Grand Canyon and return. The team selected the Grandview Trail down to the Tonto Trail leading down to the Colorado River and the first portion of the Escalante Route. According to the National Park Service, this was the first recorded attempt by lower limb amputees to descend to the bottom of the Grand Canyon and return. Their objective: to find medical solutions to further improve the science impacting the advancement of their prosthetics and Traumatic Brain Injury (TBI) treatments. Rob Ferguson and Denise Becker guided the Team through the Grand Canyon. The expedition was the team’s first Grand Canyon Expedition.

The J.E. Hanger College of Orthotics and Prosthetics, St. Petersburg College in St. Petersburg, Florida, partnered with the Combat Wounded Veteran Challenge to provide clinical support for amputee backpackers during their expedition. In addition to the clinical support Certified Prosthetist and Program Director Arlene Gillis provided, the school arranged for former O&P graduate student Cameron Lehrer to join the team of Combat Wounded Veterans to document his prosthetics case study. His case study followed each amputee’s reaction to the environmental stresses of the Grand Canyon.

In clinical practice, volume change within the residual limb presents a daily challenge in maintaining a comfortable and well-fitting socket for the amputee. These volume changes are typically accommodated for by the use of various thicknesses of prosthetic socks. Volume changes can reduce or increase throughout the day, but the amputee is often told to increase his/her sock ply throughout the day; leaving the amputee to assume that a volume loss, not a volume increase, occurs. In Cameron Lehrer’s clinical experience, a correlation with extreme heat and increase in residual limb volume has been noted. As such, an increase in the residual limb’s volume would require the removal of socks (if possible) in order to improve the fit of the socket, and this is more often than not, the opposite of what amputees are told to do. The main objective of this case study was to monitor the residual limbs’ volume changes throughout the day in the extreme heat climate of the Grand Canyon; commonly reaching over 100 ⁰F in the summer months.

Saint Petersburg College’s J.E. Hanger College of Orthotics and Prosthetics partnered with the Combat Wounded Veteran Challenge (CWVC) to give back, by means of support, to Combat Wounded Servicemen and women. SPC provides support for the CWVC and helps to foster hope for other amputees and Combat Wounded and Injured by raising awareness of the issues that impact their community of interest. Students at the O & P College are able to get exposure to help veterans problem solve while they work together in challenging real world environments.

A Leader in the Field

St. Petersburg College has been a leader in orthotics and prosthetics training. To assist our Wounded Veterans, Program Director Arlene Gillis has participated in a heralded study with Florida State University and the Department of Veterans Affairs to develop adjustable sockets that better fit residual limbs.

Regarding the biomedical support aspects of this research expedition, Cameron Lehrer conducted observation and preliminary assessments on the amputee’s residual limbs at Mather Campground prior to the team’s descent into the Grand Canyon to gather the baseline data to determine their gait, balance and volume measurements.

About the Grand Canyon

Grand Canyon is considered one of the finest examples of arid-land erosion in the world and is the canyon by which all other canyons are measured. The combination of its immense size, dramatic and colorful rock exposures, natural resources, inspire a wide-range of profound emotional, artistic, scientific, and spiritual responses. In 1919, the people of the United States recognized its value by protecting Grand Canyon as a National Park. It was designated a World Heritage Site in 1979. Incised by the Colorado River over the last 6 million years, the exposed rock layers of Grand Canyon present an excellent record of geologic time. The rocks which range in age between 1.84 billion to 270 million years old contain a rich and diverse fossil record. Grand Canyon National Park encompasses 1,218,375 acres and lies on the Colorado Plateau in northwestern Arizona. It is 277 river miles (446 km) long, up to 18 miles (29 km) wide, and a mile (1.6 Km) deep. The land is semi-arid and consists of raised plateaus and structural basins typical of the southwestern United States. Forests are found at higher elevations while the lower elevations are comprised of a series of desert basins.

The Park contains several major ecosystems. Its great biological diversity can be attributed to the presence of five of the seven life zones and three of the four desert types in North America. The five life zones represented are the Lower Sonoran, Upper Sonoran, Transition, Canadian, and Hudsonian. This is equivalent to traveling from Mexico to Canada. The Park also serves as an ecological refuge, with relatively undisturbed remnants of dwindling ecosystems (such as boreal forest and desert riparian communities). It is home to numerous rare, endemic (found only at Grand Canyon), and specially protected (threatened or endangered) plant and animal species.

More profile information from the National Park Service can be located at the following links:

The CWVC Grand Canyon research expedition was led by SSG Peter Quintanilla, and guided by Taztourz founder Rob Ferguson and Denise Becker. In addition to trail guiding, Denise is also a trauma nurse and photographer.

The Combat Wounded and Injured military participants who comprised the Grand Canyon Research Expedition team were selected by a committee of their peers and participating professional medical researchers and providers from St. Petersburg College of Orthotics and Prosthetics. Their selection was based upon the nature of their specific injury sustained in military combat or during military service as well as their intense desire and commitment to participate in medical research and improve upon the functionality of their condition, ultimately inspiring other wounded veterans to do the same.

St. Petersburg College of Orthotics and Prosthetics selected Cameron Lehrer as the prosthetic clinician who monitored the amputee participant’s safety and status during the expedition. Cameron also collected data and monitored the veteran’s anatomical reactions to the changes in environment during the descent and return climb. Specialized equipment and measurement tools such as residual limb measurement gauges were necessary to accompany the research team.

The Combat Wounded & Injured Grand Canyon expedition team was comprised of the following:

Our objectives were to conduct leg prosthesis (transtibial and transfemoral) field research studies of Combat Wounded Veterans during a week-long backpacking trek into the Grand Canyon. Our team collected valuable information and medical data during this “Challenge Expedition” to contribute to the science of human performance, rehabilitation and recreation under extreme conditions. The unique information gathered is being prepared for dissemination to relevant groups of rehabilitation professionals who will find it useful to 1) advance the state of science and, 2) inform the rehabilitative care of others with similar prosthetic needs, specifically: 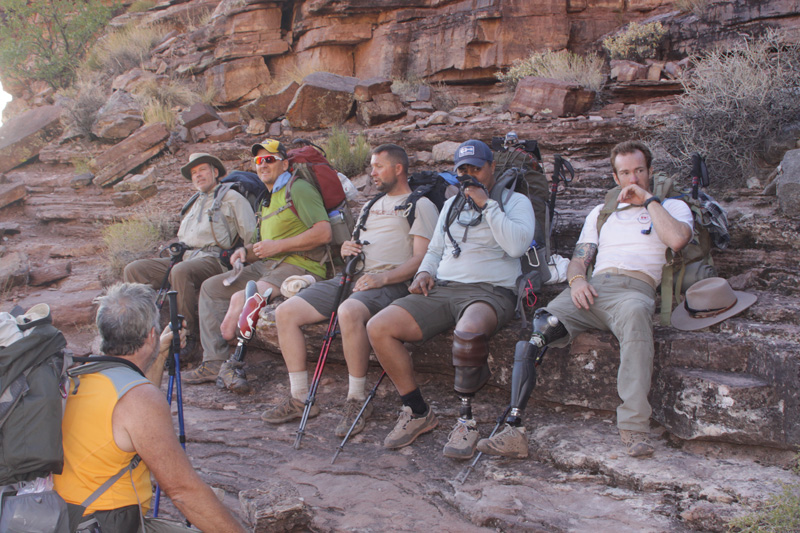 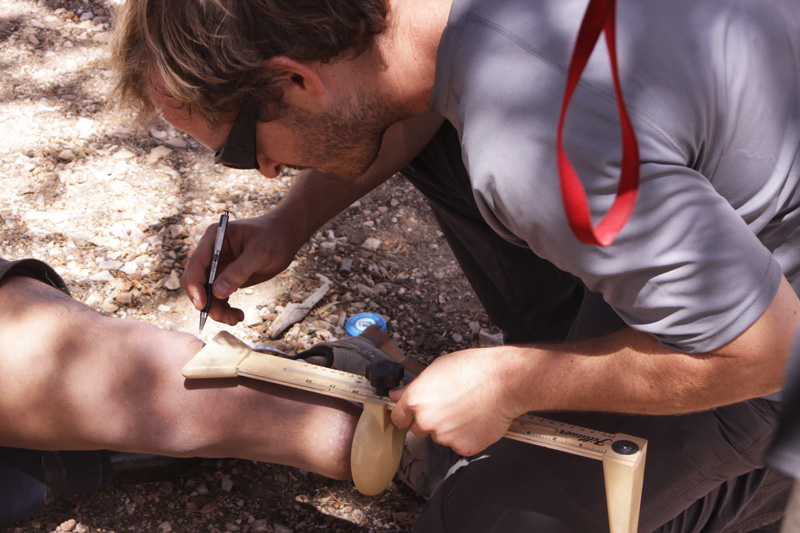 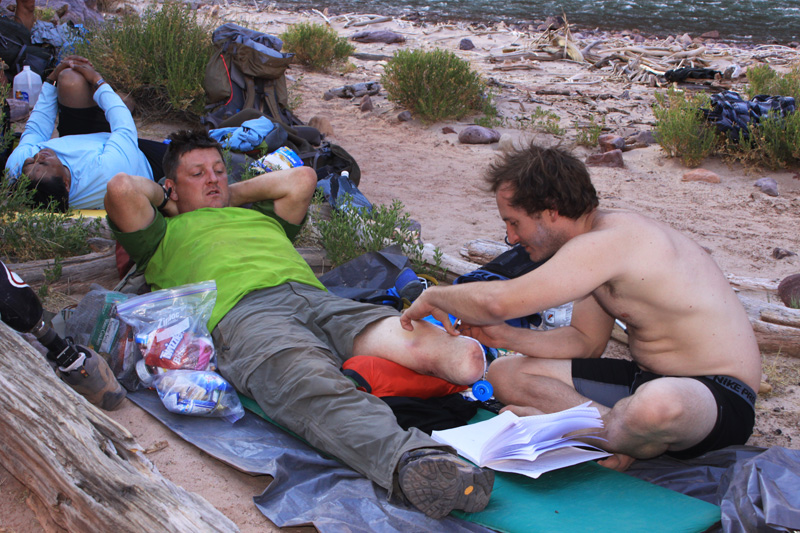 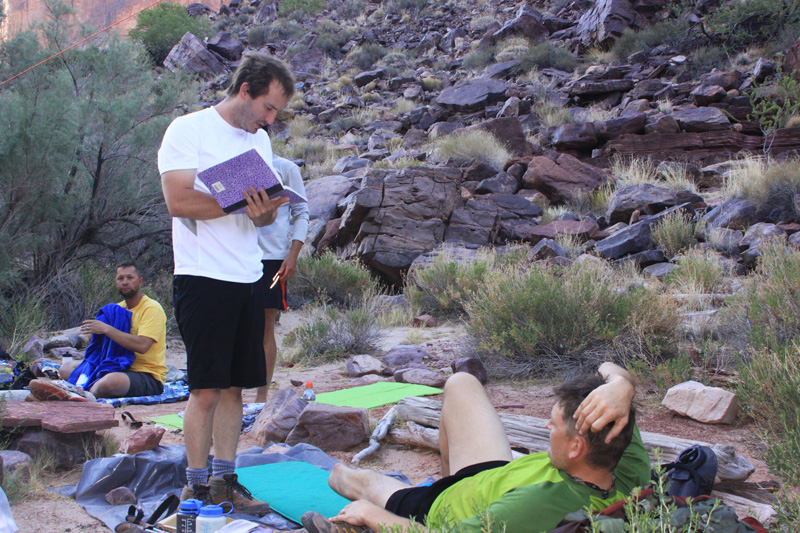 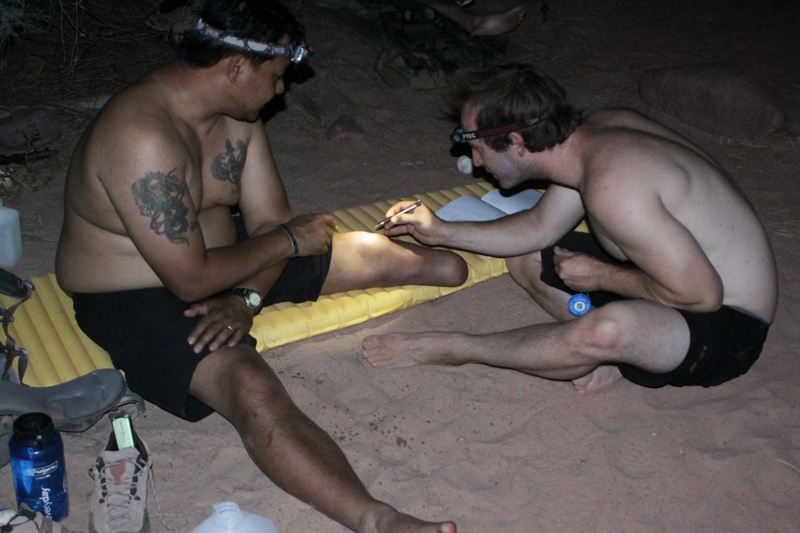 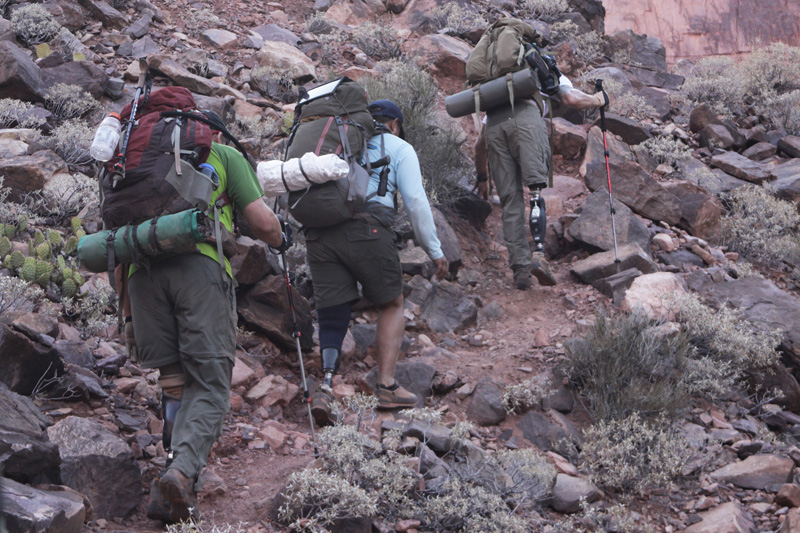 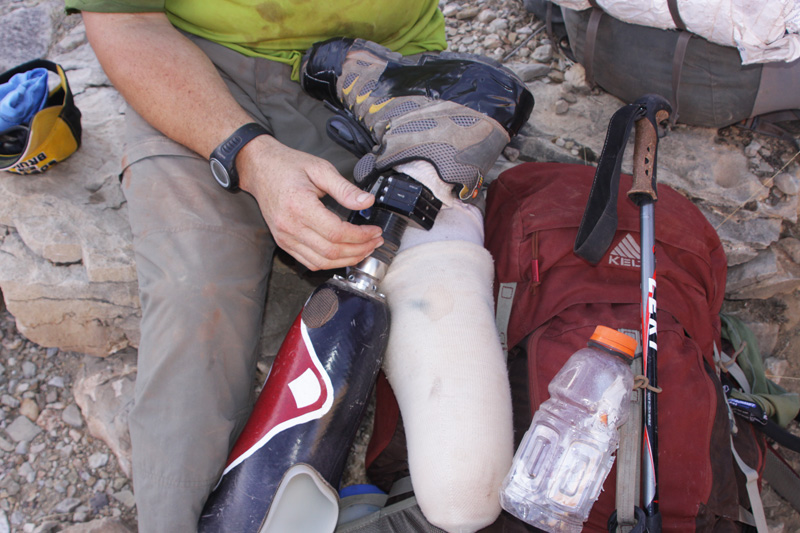 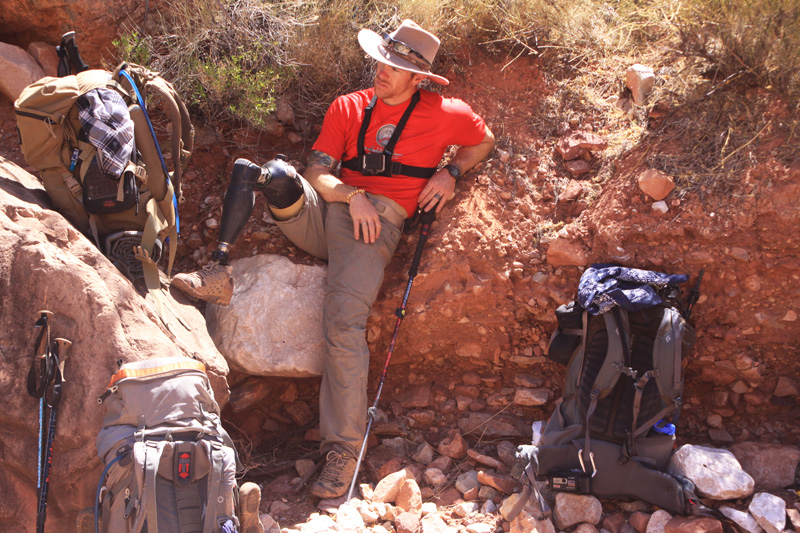 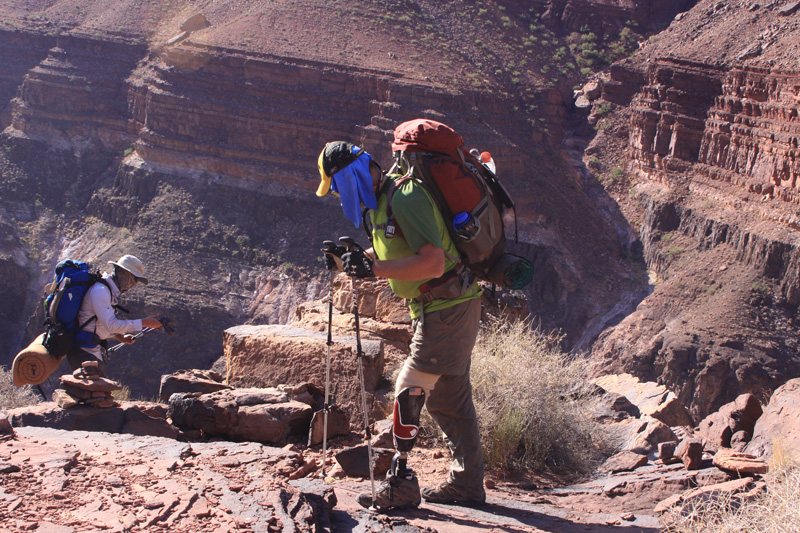 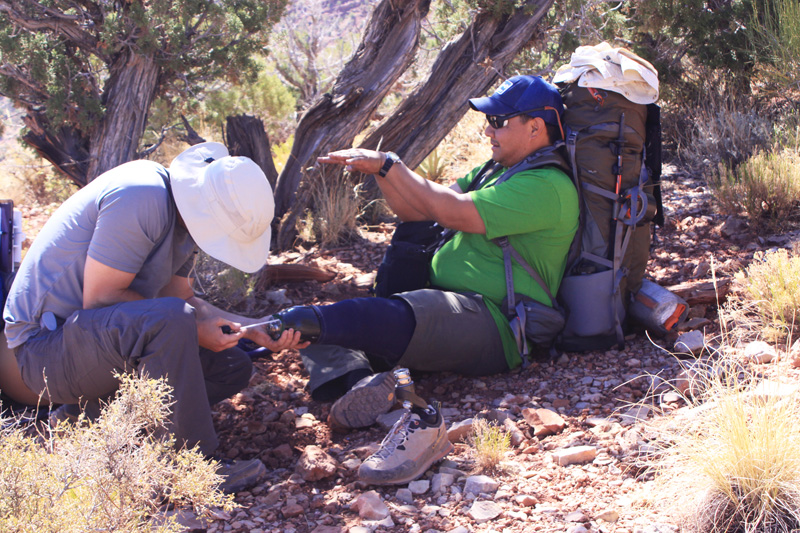 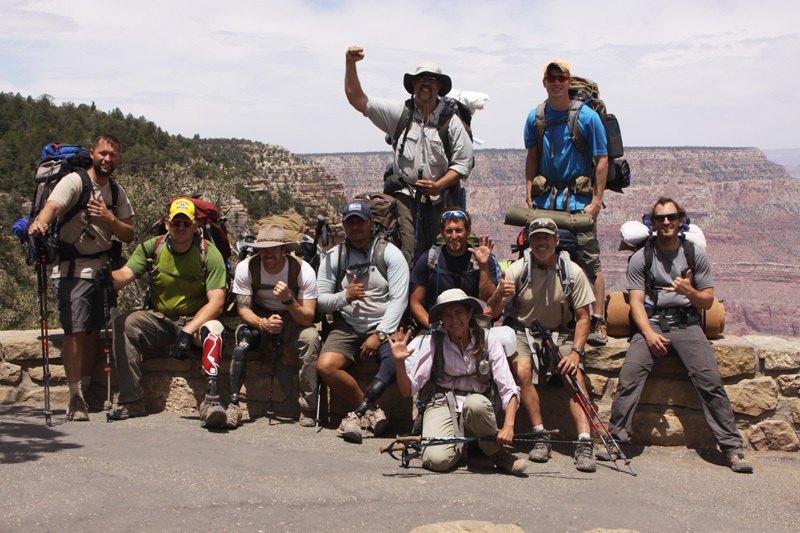 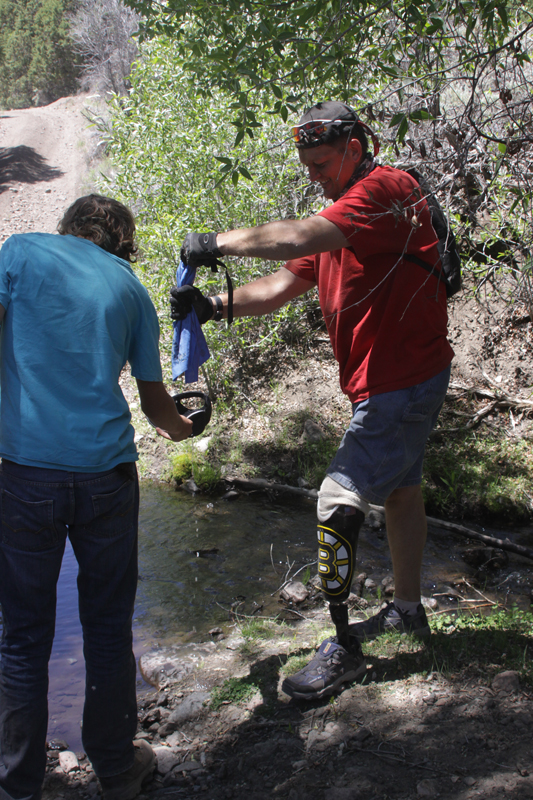 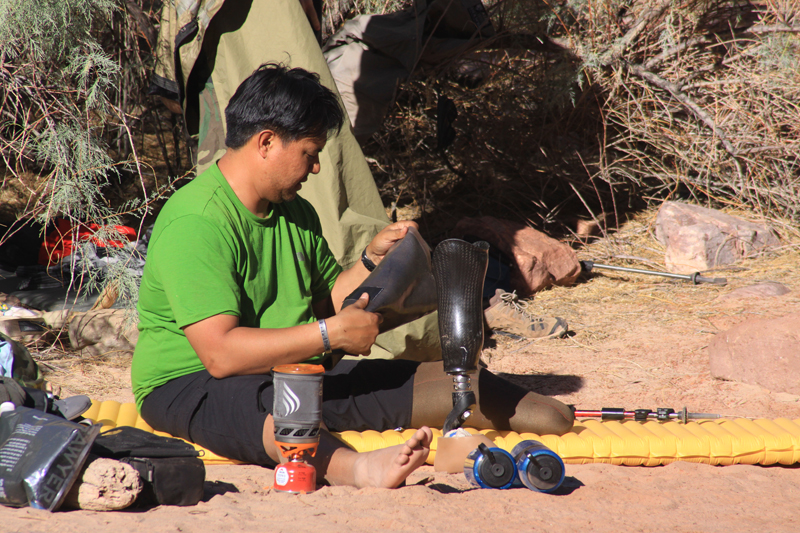