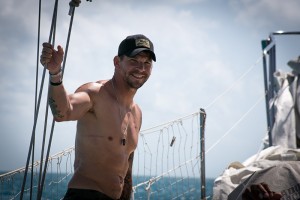 Meet Roland Vaughan, another member of the Aconcagua Summit Challenge Team. Roland has participated in several of our CWVC Challenges.

An avid photographer and filmmaker, Roland served as an Army Ranger in Iraq and Afghanistan. In 2007, Vaughan was struck by a roadside bomb that nearly killed him. He refused to give up and was given a chance to leave the military. Instead, Roland powered through recovery, returning to active duty for two more deployments and was awarded a Purple Heart.

When asked what the driving force was behind making the Aconcagua ascent, he responded, “I want this summit as a challenge to take myself to a new breaking point. I want a reminder that this is a big world and I can do anything as long as I never quit.”

Vaughan emphasizes, “Knowing this, it also gives me a chance to clear my head and remember that I have that mentality. Sometime in life we lose focus and get caught up in our own heads for better or for worse. We try to stay the course, but some things don’t like to stay buried. Having a mission such as this with a strong team much like those I served my country with, restores my strength, my mind, and my heart.”

Roland is an adventure minded individual that seeks out opportunities to explore. His contributions to CWVC include TBI and PTS studies, while also documenting Challenges through the lens of his camera as part of the CWVC Production Team.

Next up, Billy “Badass” Costello tomorrow on CWBC Blog Central!