The following press release has been provided from the SCUBAnauts: 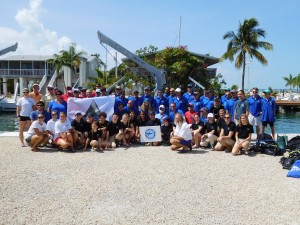 On Monday, July 20, Mote Marine Laboratory joined forces with members of the Combat Wounded Veteran Challenge (CWVC) and SCUBAnauts International in an underwater mission to restore Florida’s reef. In all, more than 50 divers planted some 250 fragments of staghorn coral in Mote’s special restoration site near Looe Key.

This year marks the fourth year that the groups have worked together to plant coral fragments that were grown in Mote’s underwater coral nursery in the restoration area. Mote established the nursery more than eight years ago to grow colonies of the threatened staghorn coral (Acropora cervicornis) for replanting on decimated or damaged sections of reef within the Florida Keys National Marine Sanctuary.

When the colonies reach a suitable size, small fragments nearly 2 inches long (about 5 cm) are snipped off and used to create a new colony — similar to the way new plants are grown from cuttings of existing plants. Then these cuttings are then mounted on the reef so they can grow and develop into new colonies.

“I can’t think of a better way for Mote to celebrate its 60th anniversary year than working with volunteer citizen scientists — these SCUBAnaut youths and combat wounded veterans — to conduct the science necessary to restore coral reefs that have been damaged over the last several decades,” said Mote President & CEO, Dr. Michael P. Crosby. “The reefs are so damaged and stressed that they cannot repair themselves without our help, so it is important that we undertake this mission to restore them. This mission also helps us raise awareness in the community about the importance of coral reefs, which in Florida are home to 6,000 species, support 72,000 jobs and contribute to healthy oceans that provide more than 50 percent of the oxygen we breathe — keeping us all alive.”

Mote has about 10,000 coral colonies — some 150,000 fragments — growing in our underwater nursery representing nearly 60 different genotypes. “Since Mote began this work, we have planted more than 7,700 coral fragments to help restore Florida’s reef and the annual mission with the CWVC and SCUBAnauts has been a major part of accomplishing that work,” said Erich Bartels, Manager of Mote’s Coral Reef Monitoring and Assessment Program who oversees the staghorn coral nursery project.

The Combat Wounded Veteran Challenge improves the lives of wounded and injured veterans through rehabilitative high-adventure and therapeutic outdoor challenges while furthering the physiological, biomedical and pathological sciences associated with their injuries. The veterans who participate in the outdoor challenges have suffered from traumatic brain injuries, PTSD or have lost limbs. Military medical personnel and prosthetic experts from Florida State University and Florida International University participated in this trip to help evaluate the veterans’ recovery from injuries and develop next-generation prosthetics suitable for extreme aquatic activities.

SCUBAnauts International’s mission is to guide young men and women ages 12 through 18 along an exciting pathway for personal development by involving them in the marine sciences through underwater marine research activities, such as special environmental and undersea conservation projects, that build character, promote active citizenship and develop effective leadership skills.

During this mission, the youths and veterans had the opportunity to work together in a cross-mentorship adventure with the SCUBAnauts sharing their knowledge of the underwater world and the veterans showing the teens how to move forward and be successful in the face of adversity.

Retired Staff Sgt. Bobby Dove, originally from Gloucester, Virginia, and now of Destin, Florida, served as a Green Beret in the U.S. Army Special Forces. He was injured on June 9, 2012, by an IED that blew up while he was driving a dirt bike on combat patrol in Afghanistan. As a result, his dominate hand and leg were amputated. On Monday, he made his first coral restoration dive.

“It was great!” he said. “After you’re injured, it’s hard to know what’s next. But it’s great to know that we are doing something important for the reef and diving on this trip was especially good because I had a mission and a job and it meant that for this dive I was focused only on that task and could forget about any pain from my injuries and not worry about my prosthetics for 30 minutes.”

“Seeing the drive and determination of our veterans puts every day struggles into perspective,” said Jim Cassick, President & CEO of SCUBAnauts International, which is based Palm Harbor, Florida, . “This unique partnership fits perfectly with our primary purpose to inspire our ‘nauts to develop effective leadership skills, make better decisions and build character. As much as our veteran mentors influence our youth, we find that our ‘naut’s skill, knowledge and passion inspires our veterans about the future. These two seemingly different groups come together to inspire each other and make a positive, lasting difference for our environment.”

Diver Jessica Silk, 18, participated in her last coral restoration mission as a SCUBAnaut. After four years, she’s graduated from high school and is moving on to the University of Florida where she’ll be studying applied physiology and kinesiology — in-part because of her experiences with the combat wounded veterans. “This program has been so amazing — from seeing the corals that we’ve planted in past years surviving and growing, to working with the vets. It’s really been great to be a part of this project.”

“Our wounded servicemen and women make a powerful impact and example on youth and those who face similar circumstances,” said Capt. David Olson, USN (Ret.), who founded SCUBAnauts and the Combat Wounded Veteran Challenge, which is based in Tarpon Springs, Florida. “Through these Challenge experiences, they demonstrate to others that despite their injuries, they too can overcome seemingly insurmountable personal challenges, while advancing rehabilitative research. ‘Challenge–Research–Inspire’ are the principals that govern our program.”

Mote’s Dr. Crosby sums up the mission this way: “Not only do these combat veterans and youth volunteers provide important support to Mote that helps accelerate the coral reef restoration work the organization has undertaken since 2006, they also inspire and challenge us all to do more in our shared mission of science-based conservation. Mote is built on a foundation of passion for science, partnerships with groups like the Combat Wounded Veteran Challenge and the SCUBAnauts, and philanthropic support for our research and education work. What we are all engaged in today is an exemplar of these foundational pillars, and should give us all hope and inspiration for the future.”

Support for this trip has been provided by: