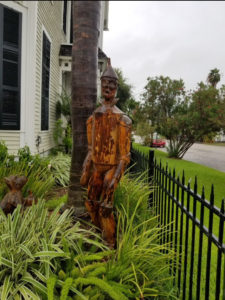 All sailing was suspended due to Tropical Storm Imelda which came ashore about 20 miles west of Galveston. Backup and alternate plans were implemented/created. These included shore-side chalk talks, marlinspike, and Galveston tours. CWVC and SSGG visited Tall Ship Elissa, Galveston Seawall and the coastal waves, and tree carvings. These tree carvings are unique: when Hurricane Ike came ashore in 2008, over 80% of the island was underwater; the seawater killed many trees including palms, oaks and pines; creative wood carvers set to work on selected dead trees and created interesting figures. The one shown should be self-evident as The Wizard of Oz’  Tin Man.

Again, Jeannie and Judy hosted another delicious dinner, which was followed by veterans describing the “purpose” for them behind CWVC. Later, participants and families tied knots and watched a movie.