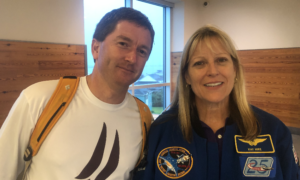 Another remarkable day under Tropical Storm and then Depression Imelda which merged with multiple fronts to stall over East Texas. Thursday saw the heaviest rains of the week, with much of the region shut down. Rainfall exceeded 40 inches in 24 hours in some regions.

However, and yet again, SSBG stars Dave Gaston and Mike Janota (along with their devoted sailors and volunteers) and CWVC Deb Pawlowski and Dave Caras, advanced the success of the Sailing Challenge. How so? They taught right-of-way rules in innovative ways; they illustrated and demonstrated racing tactics and strategies; they motivated and excited the sailors for the sport and for life.

Mid-afternoon, despite the heavy rains and most roads closed due to flooding, Kay Hire appeared as Mike and Dave’s “special guest speaker.” As described in yesterday’s “summary”, Kay is a former NASA astronaut, US Naval Academy graduate, and member of USNA’s Varsity Sailing Team. She spoke for one hour… then another hour… then another hour… Everyone was thrilled as she shared her experiences as a sailor, as a naval officer, and as an astronaut. This was a privilege for everyone involved as she weathered the storm that dumped more than two feet of rain on drenched southeast Texas (a few spots saw more than 40). She demonstrated a devotion to our wounded and injured veterans that was enlightening and humbling to all. 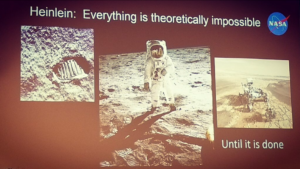 Dinner again, prepared and served by sisters Jeannie and Judy, was delicious. They personally devote time and energy to the success of the Sailing Challenge, and they demonstrate the finest qualities of Sea Base (teamwork, leadership, respect, service).

With a better forecast after a week of storms, Mike Janota and Dave Gaston rearranged Friday’s schedule: Breakfast at 0600, rig the boats at 0700, sail at 0730. Mike and Dave continue to tirelessly demonstrate a devotion to service that we should emulate.