Combat Wounded Veteran Challenge is located at 26 West Orange Street, in beautiful Tarpon Springs, Florida. It is a historic structure built by Ernest Robert Meres for his wife, Emma Drake Meres and their family. Ernest was the son of Walter and Amelia Petzold Meres who arrived from Bradford, Pennsylvania. They owned and managed the Ferns Hotel on the SW corner of Tarpon and Pinellas Avenues. Amelia was greatly loved and well known in Tarpon Springs as “Mother Meres”. Ernest was co-founder of the Tarpon Springs Sponge Exchange in 1907-08.

Although it is considered the “Meres” house, the blue Floridians 2000 plaque on the front gate was dedicated to Colonel Henry McKie Salley, by the State of Florida and City of Tarpon Springs in the year 2000.

In 1999 the State of Florida searched for 2000 individuals who had a significant impact on the state in some way and asked Florida cities to nominate individuals for consideration of this special award. The City of Tarpon Springs honored Colonel Salley with the designation and awarded his family the plaque. It now hangs prominently on the front gate of the CWVC property.

Meres House Circa 1915 – Mr. and Mrs. Ernest Meres in front of the house

The Meres House was built in 1901 and the family moved into the house with their three children: Katherine, Walter and Francis. Emily and Ernestine were born a few years later. By 1936 all Meres family members had passed away with the exception of Emma, Emily and Ernestine. Their mother, Emma, remained living in the home until her death in 1949. Ernestine married Henry McKie Salley, a civil engineer involved with road and bridge construction in Florida and the Carolinas. They met while laying many of the brick streets in Tarpon Springs and Anclote as well as building the causeway to what is now Sunset Beach.

The home is not only historically significant, but is noteworthy from a military perspective as well. During WWII, Colonel Henry McKie Salley was in England building airfields for the 8th and 9th Air Forces, while Ernestine and their three children moved into the house to help care for Emma. After WWII, the Salley family accompanied Col. Salley on various Army assignments, but occupied the house once again upon Col. Salley’s retirement from the Army. They remained in the house for the rest of their lives. Ernestine died in 1988 and McKie in 1994. Their youngest son, Dr. Charles Dudley Salley, lived in the home for several years after Col. Salley’s death. In 1999 the house was sold to Mrs. Carol Martin who restored the house and associated property to its present beautiful condition.

The great high ceiling Florida house is characterized by its authenticity. It was constructed from old Florida heart pine. The long porch where family gathered after dinner accessed the cool Gulf breezes. The wood trim in the house came from the old Sutherland Hotel in Palm Harbor. The marble around the fireplace came from the old Royal Theater located in the Meres Building in downtown Tarpon Springs. The house was initially lighted by carbide lamps throughout the home. For safety purposes the gas was generated in a “gas house” located next the house and piped into the house. The yard was filled with a great variety of palms, bamboo, ferns, bromeliads, citrus trees, mango trees and other Florida plants. All the vegetation, including the great live oaks, was planted after the house was built. 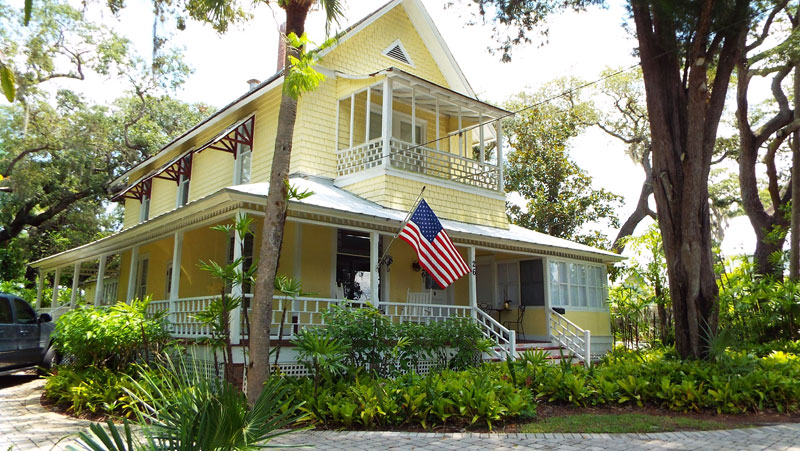